Too many people are still unaware of the health hazards associated with drinking energy drinks.  As I always say, the best motivator is information, so here are 5 reasons to avoid energy drinks: 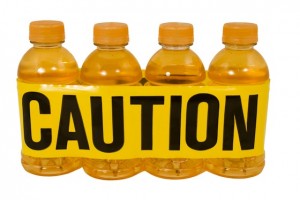 1. Each Energy Drink Has More Caffeine Than Four Cokes

After a hard night or at the beginning of a slow-going morning, it might sound like a really great idea to substitute your morning coffee with an energy drink, but this much caffeine is injurious to health. This is particularly true of people who have pre-existing cardiovascular health problems.

2. There are 13 Teaspoons of Sugar in Each Drink

Not only will this much sugar eradicate the gains of any well-meaning exercise plan, but it’s simply not good for you. This amount of sugar impairs absorption of fluids, which means that you are more likely to become dehydrated. Sugar also suppresses the immune system, increases inflammation and raises insulin levels. The sugar content of energy drinks should convince anyone to give them a miss, but if that’s not enough, let’s go on.

3. Energy Drinks Make You Feel Sober When You’re Not

Combining alcohol and energy drinks is quite trendy, but the consequences are disastrous. According to the New York Times, an American athlete drank several shots of tequila at a bar, which he then followed with a Red Bull. The energy drink disguised his level of intoxication, so he got in a car to drive home. He ended up killing a pedestrian as a result.

A spate of incidents in which young people have died from energy drinks prompted the University of Texas Health Science Center at Houston and the University of Queensland in Australia to look more closely at the ingredients used and the impact they have on people. In their report that was published in the Mayo Clinic Proceedings journal, they noted that there have been at least five cases of people dying caffeine related deaths, after drinking energy drinks; a healthy 28 year old suffered cardiac arrest and an 18 year old died playing basketball after drinking two cans of Red Bull. There have also been four cases of mania in people who are bipolar.

5. What We Don’t Know Could be Even More Serious

The above references what we do know about energy drinks, but what we don’t know could be even more serious. Dr. John P. Higgins and co-authors wrote in the Mayo journal that teens and young adults are consuming these beverages at an “alarming rate” without knowing what the long term effects are. Some possibilities include liver and cardiovascular disease and life-threatening risks to brain and heart function. The scientists also called for more regulation by health authorities.

So, the next time you’re feeling sapped and start looking to your favorite energy drink for help, opt for a glass of water instead. Not only is this healthier for you, but it is also more effective as a hydrated body is an energized body.