After being diagnosed with liver cancer, Mike Cutler received a liver transplant and was given a new shot at life.  Then, in late 2012, the disease came back, and he decided to treat himself with home-made Cannabis oil. 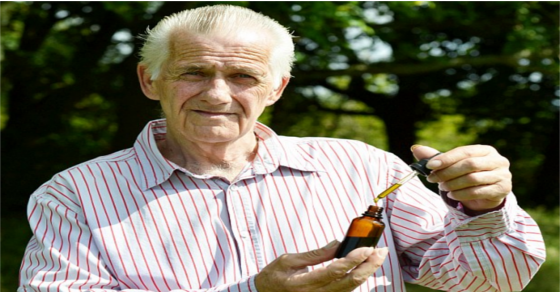 Mike Cutler, a 63 year old retired builder from Hastings, East Sussex, England, was diagnosed with cancer of the liver in 2009.  After receiving a transplant, doctors cleared him to leave the hospital and in their minds he was cured of cancer.

Unfortunately, looking at the human body like a machine, where we can just replace parts that we think are defective, is an ignorant strategy, and not surprisingly, his cancer returned in late 2012.  “Finding out I could die was terrible. All I had in those dark days was my laptop, and that’s when I began searching for something else that could help me – I couldn’t accept I was going to die,” said Cutler.  In an act of desperation, he began researching online for alternative cancer treatments, and found a YouTube video that talked about the use of cannabis oil as a cure for cancer.

Without hesitation, he purchased cannabis oil through a dealer, and encapsulated it for himself with a plan to take 1 per day.  When he began taking the thick, tar-like medicine consisting of high concentrations of THC, CBD, and other cannabinoids from the cannabis plant, he said that within 3 days all of his pain and other symptoms had disappeared.  Months later, Mike went for a biopsy at the Royal Free Hospital in London, where doctors confirmed that the new cancerous cells in his liver had vanished.

After hearing that his cancer was completely cured, his reaction was that of complete shock.

Since curing himself of cancer with cannabis oil, Mike Cutler has been growing his own cannabis plants to ensure he has a constant supply of medicine for himself, and is now campaigning for cannabis legalization to allow all forms of cannabis medicine to be legally used to treat disease.