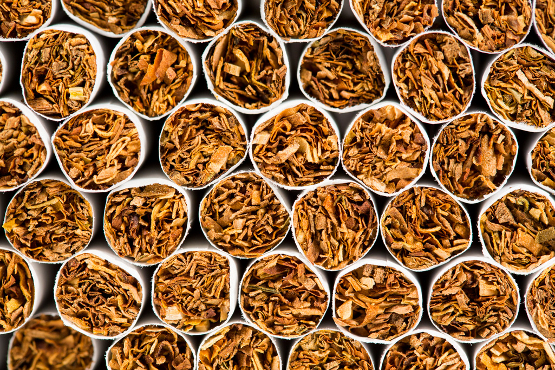 When you smoke, the first thing that happens is a mix of gases is released around your eyes, nose and throat. This happens within the first few seconds. Deep inside the lungs, cigarette smoke damages the floating scavenger cells that work to remove foreign particles from the lungs’ tiny air sacs. A lot of what people you inhale turns to tar. This tar isn’t unlike what you might use to pave a road or shingle a house. Only about 30 percent of cigarette tar is sent back into the air through exhalation – the rest sticks to your throat and lungs like saltwater taffy. A pack-a-day smoker ingests a full cup of tar into his or her lungs every year.

The chemicals in cigarette smoke are pretty much immediately absorbed into your bloodstream. From here they go straight to your heart and from there, everywhere else in your body. Your heart begins to beat faster as soon as you light up, as much as 10 to 25 beats per minute. That adds up to 36,000 extra beats per day. Smoke can also cause an irregular heartbeat, or arrhythmia. The oxygen level in your blood is reduced because the carbon monoxide produced when you smoke tricks the body into thinking that it’s oxygen. Problem is, your body’s cells still need oxygen, so your heart goes into overtime to supply it.

If you continue to smoke regularly, your senses of taste and smell will slowly fade, thanks to the tar that coats your tongue and nasal passages. You probably won’t even realize it’s happening and may only notice what you’ve been missing when you quit. Most smokers who quit report a noticeable change in how their food tastes and smells.

The myth of low-tar cigarettes is just that — a myth. Cigarette manufacturers poke tiny little holes in the filter to “reduce” the amount of tar you ingest. Sounds good, right? Unfortunately, your fingers block most of these holes when you hold a cigarette, and low-tar smokers end up inhaling more deeply to achieve the nicotine hit they crave.

The word “light” on cigarette labels should not be interpreted as “safer,” but a sizable number of smokers seem to read it that way, according to a Swiss survey. Canadian researchers have actually detected a concentrated effort to deceive the public about the health risks from cigarettes described as “Light” or “Ultra-Light.” Low-tar cigarettes do not carry a lower risk of lung cancer, according to one of the first studies comparing lung cancer deaths among smokers of ultra-light, mild and medium filtered cigarettes.
What else happens when you smoke?

Another thing that happens when you smoke is that your blood pressure rises by about 10 to 15 percent. High blood pressure means you have an increased risk of heart attack and stroke. Smoking not only affects the pressure, but it also damages the blood itself. when you smoke, carbon monoxide (CO) is created and ingested — so much that smokers have about 4 to 15 times the amount of CO in the body than non-smokers. Carbon monoxide also is the same stuff that comes out of your car’s tailpipe. When you smoke, it stays in your bloodstream for about six hours. This harmful chemical compound does its best to rob every cell in your body of oxygen, something cells need to function.

Most smokers know the damage they’re causing to their lungs, heart, blood vessels, and senses of taste and smell. Something many smokers may overlook is the damage being done to their skin. While many of smoking’s negative effects are reversible once you quit, there’s no way to undo the skin damage. The blood vessels in the skin constrict when you light up, limiting the amount of oxygen the skin gets. The intrusion of CO puts further limits on the oxygen the skin needs. What does this mean? Wrinkles. “Smoker’s face” is a condition long-term smokers suffer from. What does it look like? Deep, dark lines around the eyes and the corners of the mouth, for starters. The skin may also appear gray in color, and facial features may appear gaunt. Not a pretty sight. One study shows that nearly half of all smokers get smoker’s face.