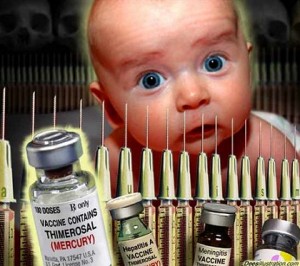 Thimerosal is a widely used vaccine preservative that is present in the majority of flu shots and other vaccines.  Thimerosal is 49% mercury by volume, an extremely toxic chemical element that wreaks havoc on the nervous system, neurological function, and overall biological function [1]. Each dose of flu vaccine contains around 25 micrograms of thimerosal, over 250 times the Environmental Protection Agency’s safety limit of exposure.

Mercury, a neurotoxin, is especially damaging to undeveloped brains. Considering that 25 micrograms of mercury is considered unsafe by the EPA for any human under 550 pounds, the devastating health effects of mercury on a developing fetus are truly concerning.

Though thimerasol is not entirely mercury, the mercury content is still extremely high, making it very toxic to the human body. Despite highly exceeding the EPA safety standards for mercury content by over 250 times, flu shots are still recommended for children over 6 months and pregnant women.

It seems that the age groups that are urged to receive the flu shot are actually most affected by mercury exposure. Young children, pregnant women, and elderly are the ‘targeted’ demographic of flu shot manufacturers, and these individuals also happen to have the least defense against the elemental neurotoxin mercury.

A recent study looked at the immune reaction in newborn infants up to the age of one year who had received the HepB vaccine to see if their immune reaction differed from adults getting the same vaccine. What they found was that the infant, even after age one year, did react differently. Their antibody levels were substantially higher than adults (3-fold higher) and it remained higher throughout the study.

In essence, they found that the babies responded to the vaccine by having an intense Th2 response that persisted long after it should have disappeared, a completely abnormal response.

In 2004, the The Coalition for Mercury-free Drugs petitioned the FDA to limit the use of thimerosal in vaccine citing safety concerns. In a reply made public years later, the FDA denied the request despite overwhelming evidence that mercury is harmful to the human body [2] [3] [4].

In addition to mercury, vaccines also contain other toxic fillers and preservatives that have been linked to health conditions such as cancer:

By recommending flu shots to the public, the CDC and vaccine manufacturers are ignoring the warnings of not only major studies conducted by prominent universities, but also the EPA. The EPA’s safety limit of mercury exposure is being exceeded by over 250 times each shot. In addition to a number of other ‘recommended’ vaccines, flu shots are dished out each year to the public, meaning that this exposure increases to 250 times the limit each year. Over a 10 year period, it is possible to exceed the limit by 2500 times simply by receiving a yearly flu shot.

TwitterFacebookLinkedinEmail
Posted in Vaccines and tagged bill gates, epa, flu shot, thimerosal, Vaccines
← The Shocking Dangers Of Colonoscopies10 Things People Have No Clue Are Inside Meat →