The bright-purple flowering plant with glossy, marbled leaves known as Milk Thistle, has been shown in many scientific studies to kill cancer cells, with no side effects. 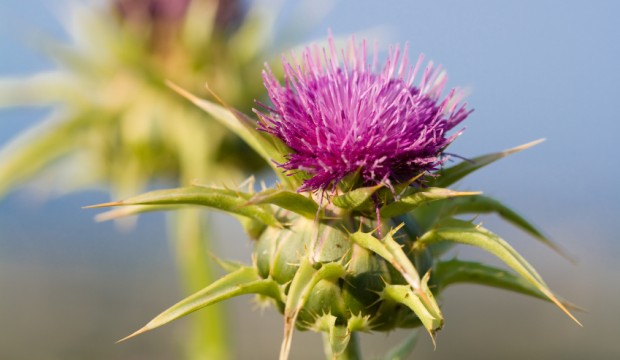 Used in herbal medicine in the treatment of liver diseases for years, Milk thistle was originally native to Southern Europe through to Asia, but can now be found almost everywhere in the world.  Silymarin from milk thistle (Silybum marianum) plant has been reported to show anti-cancer, anti-inflammatory, antioxidant and hepatoprotective effects.

One roadblock to successful treatment with Silymarin is a result of its extremely poor water solubility.  With recent advances, as you’ll see in some of the studies summarized below, researchers have begun encapsulating Silymarin in nanoparticles for enhanced delivery.  Whereas Vitamin C is primarily water soluable, and people like Dr. Thomas Levy have figured out a way to encapsulate the vitamin C molecules inside a lipid (fat) layer for enhanced delivery inside cells, Milk thistle doesn’t dissolve well in water, and researchers have developed ways to encapsulate the Milk Thistle compounds to make them more water soluable and bioavailable to the human body.

10 Studies on Milk Thistle vs Cancer

Milk thistle, and its assortment of medicinal bioflavonoids contained within the plant, such as silibinin, silymarin, and the more recently discovered isosilybin B, have been studied and published extensively in the scientific literature.  Here are 10 studies demonstrating their effects against cancer.

How does it Work?

Although the specific mechanisms by which milk thistle components (silibinin, silymarin, and isosilybin B) help kill cancer cells is likely unique for each and is not well understood, there are things we do know about how Milk Thistle heals.

Traditionally, herbalists recommend milk thistle because it provides an important substance for assisting the liver in optimal function, leading to improved detoxification of the blood and body.  Because of these properties, alcoholics and drug addicts using various other substances have employed milk thistle in their programs to detoxify and heal.

After a night of heavy drinking, milk thistle is a great choice to protect the liver from alcohol-induced damage.  Study #7, which I summarized above, provides evidence that the medicinal anti-cancer effects of milk thistle derive from its ability to boost the immune system.

[quote align=”center” color=”#999999″]The study included treatment on immunosuppressed mice and found that the medicine didn’t work for them, which strongly suggests that the silibinin medicine works by boosting the immune system and improving the body’s ability to fight the cancer.[/quote]

It is reasonable to conclude that the immune-boosting effects of silibinin occurred by way of improved liver function, and the resulting reduction in toxicity of the blood.  This would then permit a more optimal functioning of the body, allowing it to focus on the destruction and elimination of cancer cells, rather than protecting itself from various toxins, and oxidizing substances circulating in the bloodstream.

In addition to its functional use as a plant substance that can boost the immune system, and detoxify the liver of alcohol, drugs, or prescription medications, current research on milk thistle shows clearly that it is a powerful medicine capable of reducing tumor size, and effectively killing many types of cancer cells in humans.