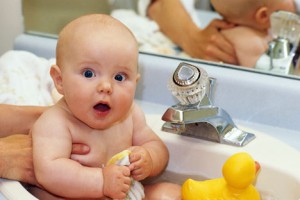 More than half the baby shampoo, lotion and other infant care products analyzed by a health advocacy group were found to contain trace amounts of two chemicals that are believed to cause cancer, the organization said yesterday.

Some of the biggest names on the market, including Johnson & Johnson Baby Shampoo and Baby Magic lotion, tested positive for 1,4-dioxane or formaldehyde, or both, the nonprofit Campaign for Safe Cosmetics reported.

The chemicals, which the Environmental Protection Agency has characterized as probable carcinogens, are not intentionally added to the products and are not listed among ingredients on labels. Instead, they appear to be byproducts of the manufacturing process. Formaldehyde is created when other c

hemicals in the product break down over time, while 1,4-dioxane is formed when foaming agents are combined with ethylene oxide or similar petrochemicals.

The organization tested 48 baby bath products such as bubble bath and shampoo. Of those, 32 contained trace amounts of 1,4-dioxane and 23 contained small amounts of formaldehyde. Seventeen tested positive for both chemicals.

“Our intention is not to alarm parents, but to inform parents that products that claim to be gentle and pure are contaminated with carcinogens, which is completely unnecessary,” said Stacy Malkan, a spokeswoman for the Campaign for Safe Cosmetics, which is calling for the government to more strictly regulate personal care products such as shampoo, lotion and makeup.

Companies that manufacture and sell the products tested by the group stressed that they comply with government standards.

“The FDA and other government agencies around the world consider these trace levels safe, and all our products meet or exceed the regulatory requirements in every country where they are sold,” Johnson & Johnson said in a statement. “We are disappointed that the Campaign for Safe Cosmetics has inaccurately characterized the safety of our products, misrepresented the overwhelming consensus of scientists and government agencies that review the safety of ingredients, and unnecessarily alarmed parents.”

The European Union has banned 1,4-dioxane as an ingredient in personal care products, but the Food and Drug Administration has not established a safe limit for the chemical in shampoo, lotion and other toiletries. It maintains that the trace amounts found in those products are not harmful.

A 1982 study by the FDA showed that 1,4-dioxane can penetrate human skin when used in lotion.

Health advocates argue, however, that federal regulators have not considered the cumulative effect of chemicals in personal care products.

“The levels we’ve found are relatively low, and the industry often says there’s just a little bit of carcinogen in my product,” Malkan said. “The problem is, we’re finding a little bit of carcinogen in many products. Many of these products are used every day, so we’ve got repeated and frequent exposure to these low levels of chemicals. They’re not the safest and purest products, and parents ought to know that.”

In addition, government studies have not examined the effect of chemical exposure on the particular vulnerabilities of infants and children, whose bodies are still developing, the advocates said.

Several Democratic lawmakers said the report is evidence that the nation’s chemical regulation system needs to be changed.

“The fact that we are bathing our kids in products contaminated with carcinogens shows how woefully out of date our cosmetics laws are and how urgently they need to be updated,” said Rep. Jan Schakowsky (Ill.). “The science has moved forward; now the FDA needs to catch up and be given the authority to protect the health of Americans.”

Sen. Dianne Feinstein (Calif.) called the findings “horrifying” and said she intends to introduce legislation that would require stronger oversight of the cosmetics industry.

Led by the Campaign for Safe Cosmetics, 44 organizations representing 1.7 million moms, nurses, doctors and other people concerned about our environment and our health signed on to a May letter to J&J, in which we asked the company to make safe products and meet with us. Read the letter and list of signers.

On April 29, 2009, Sen. Kirsten Gillibrand (D-N.Y.) introduced the Safe Baby Products Act, which directs the Food and Drug Administration to investigate and regulate hazardous contaminants in personal care products marketed to or used by children. She introduced the bill in response to the “Toxic Tub” report.

Though the U.S. FDA has yet to respond to our test results, retailers and governments in Asia have taken action. Immediately following our report release, a major supermarket in China pulled Johnson & Johnson products from the shelves amid concerns that the products are contaminated with carcinogens. Both the Vietnamese Drug Administration and the Chinese government responded by testing products immediately.

Though China later declared J&J products safe, it tested products made in China, not those for the U.S. market. Manufacturers can use different ingredients for different markets, which may be the case here. Because we don’t have the full report from China, we have no way of knowing which products the Chinese government tested or what they found.

Here in the United States, our tests found two carcinogenic contaminants in Johnson’s Baby Shampoo. In November 2011, we released a new report, Baby’s Tub Is Still Toxic, showing that while safer products are being sold in some countries, J&J has yet to reformulate globally. Prompted by growing concerns raised by the Campaign for Safe Cosmetics, Johnson & Johnson announced that it will be removing carcinogens and other toxic chemicals from its baby and adult products globally.