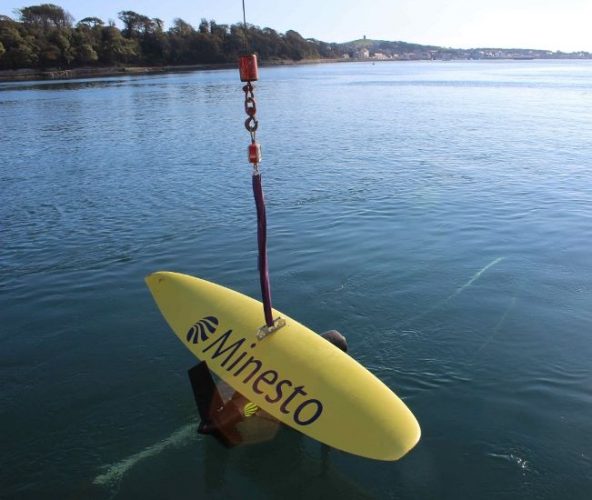 The Minesto tidal energy harvesting kite is a revolutionary new way of harvesting energy from ocean tides.  According to Minesto, the Swedish tidal energy company behind the innovation, the kite, called ‘deep green,’ can produce more energy from lower velocity currents than almost any existing tidal technologies. 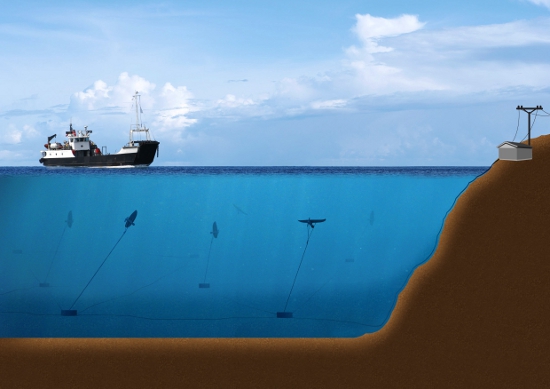 Water contains 800-times the energy of air while in motion, because it is 800-times more dense than air.  Yet relative to solar or wind, the massive amounts of energy in ocean tides remains virtually untapped.  What’s more, tidal currents have the advantage of being much more predictable than wind or solar, because they are unaffected by atmospheric conditions.

There are many ways of capturing energy from tides such as turbines, reciprocating devices, screws, barrages, or lagoons, (R) but most of these require high velocity currents and are suitable only in shallow water.  Minesto’s deep green tidal energy harvesting kite is unique in that it can be stationed in deep water and requires only low velocity currents (1-2.5m/s).  The fact that deep green can operate under lower velocity current conditions greatly increases the number of appropriate locations for its potential operation. 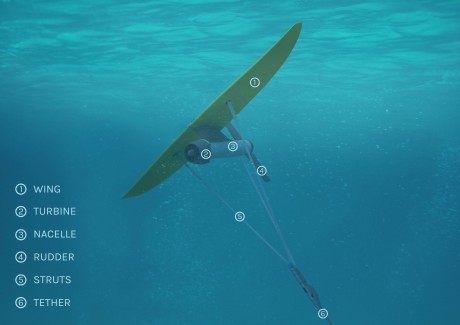 By combining a tethered wing with a turbine, the Minesto Deep Green tidal energy harvester uses the energy from ocean currents to”fly” underwater.  The kite moves in a direction diagonal to the current, which increases its velocity to 10-times greater than that of the surrounding ocean tides.  This amounts to a 1000-fold increase in energy generation due to the cubic relationship between speed and energy.

As the kite sails through the water, attached to it is a turbine and generator, which is how it collects and converts the tidal energy into electricity.

In order to fly smoothly in a figure-8 or other pattern, the Deep Green kite is equipped with a swivel attachment at the end of its tether.  The buoyancy of the wing is neutral during operation, but it can easily be brought to the surface if necessary using a remotely controlled ballast.

When compared to other tidal energy harvesting devices, the Minesto kite is lighter by a factor of 20- to 30-times.  The kite’s light weight makes it simpler and easier to handle, meaning smaller boats and equipment are needed to transport and install it.

Although the kite in the demonstration video above depicts a small kite, the full size kite is constructed using light and heavy-duty carbon and is about the size of a small plane. 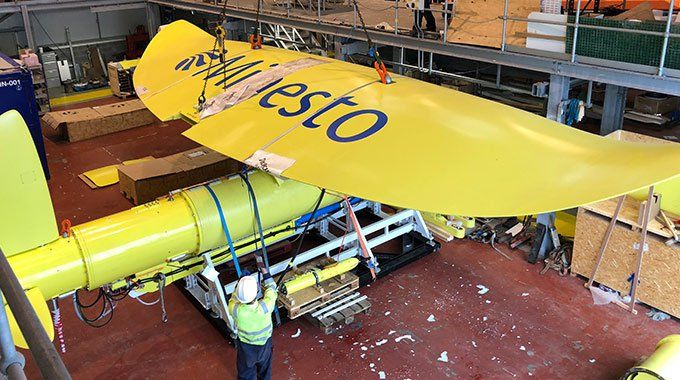 The Minesto kite is about the size of a small plane.

Can operate in areas of weak tide:
As a result of the kite’s ability to multiple its velocity 10-times greater than the surrounding ocean tides, the Minesto kites can be deployed in areas of weak tide.  In places where the cost would not otherwise be worth installing standard, (inefficient) tidal energy generators, the Minesto tidal energy harvesting kites can thrive.

There’s 800x more available energy in tides than in air:
There is 800-times more energy to be harvested in moving water than moving air.

Predictable Power Generation/Unaffected by Weather:
While solar or wind turbines can’t operate in sunless or windless conditions, because of the reliability of ocean tides the Minesto tidal energy harvesting kite can predictably operate 24/7 without interruption.

The Future of The Minesto Underwater Kite

In 2013, it was said that Minesto was planning for a larger commercial version to start producing up to 3 megawatt in 2015 and 10 megawatt by 2016.  Well fast forward to 2018 and it’s clear that Minesto has been moving forward at a consistent pace ever since.
In 2018 the team at Minesto began phase 1 of the construction and installation of their first commercial-scale Deep Green kite turbine system off the coast of Holyhead Deep, Waves.  The goal of the project is to generate 80 megawatts of electricity for commercial sale.  On May 23rd, the company announced that the installation of the micro grid system (MGS) buoy that will be used for the project had been completed.(R) 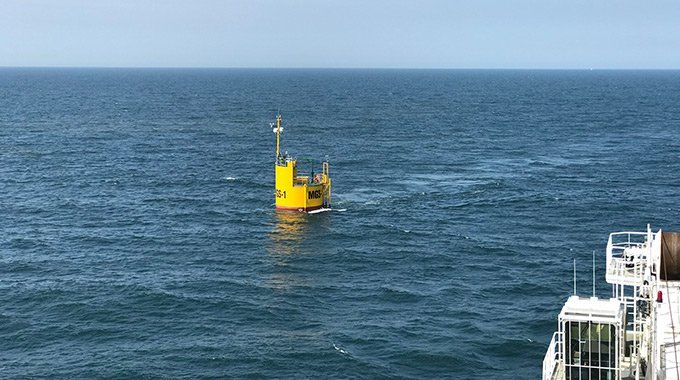 Phase 2 of the Deep Green tidal energy kite installation was completed on May 28th, 2018 and included installation of the tether as well as all supporting components and systems needed to deliver the power produced by Minesto’s first system of the unique Deep Green technology in Utility Scale.(R)  Phase 2 marks the completion of the balance of plant installation works at the Holyhead Deep site.

“We are very pleased to have finished this second step towards commissioning our DG500 device in Holyhead Deep”, said Minesto’s Chief Operating Officer David Collier. “The offshore operations team in Holyhead, with support from colleagues in Sweden and Northern Ireland, has made great efforts in executing the installation activities undertaken so far in a safe and resourceful way.”
According to Minesto, the company’s aim is to have the tidal energy harvesting plant up and running by the end of 2018.
For the latest news updates on this and other projects by Minesto, click here to view their news and media page.
For additional information please contact:
Magnus Matsson
Communications Manager, Minesto AB
+46 70 570 75 08
press@minesto.com 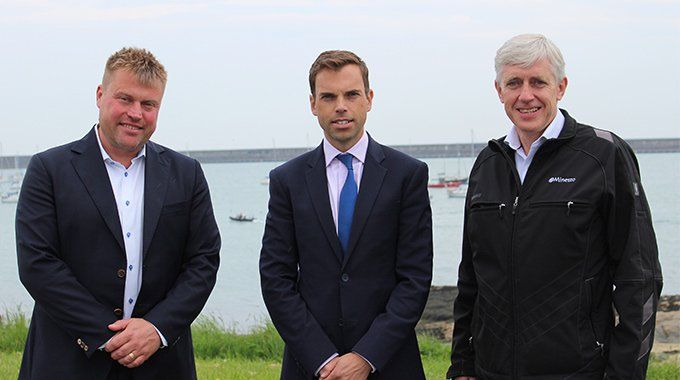 Minesto had the honour of being visited by Ken Skates AM, Cabinet Secretary for Economy and Transport in Wales, at our UK head offices in Holyhead.

Tidal energy represents a colossal amount of kinetic energy occuring 24 hours a day in all oceans worldwide.  Despite there being 800-times more stored energy in water than in air, alternative energy enthusiasts and governments have been far quicker to move forward with land-based wind and solar energy projects rather than marine based ones.

Minesto’s Deep Green represents a revolution in our ability to efficiently harvest tidal energy and is capable of meeting the energetic needs of a significant portion of the world population if employed on a large scale.  According to new internal analysis of University and marine research studies, the Deep Green device, DG500, is said to have a 600kW exploitable potential worldwide.

As a technology, Deep Green is ready for export to any countries with shorelines which are ready to implement it. Utilizing Deep Green technology for tidal energy harvesting in place of dangerous energy systems like nuclear, would undoubtedly make for a safer, cleaner and more certain future for humanity.