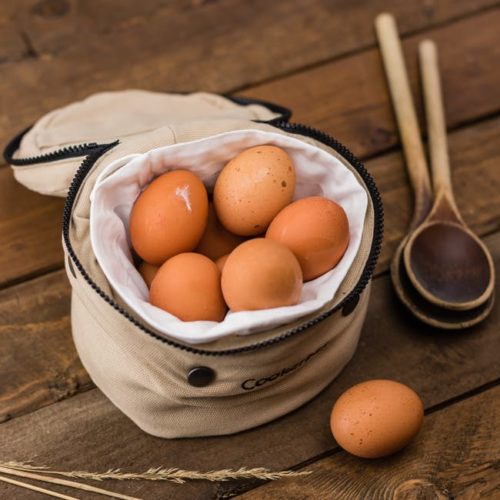 Eggs are one of the most nutrient dense foods in nature. They contain everything a baby chicken needs to grow up strong enough to break through its hard shell.

The public has been lied to about cholesterol for almost 100 years because the cholesterol mythology is extremely profitable for researchers, doctors, medical journals, drug producers and the food industry.

Helping people make more informed health decisions and preventing unnecessary suffering is what inspired me to write this article.  I hope it puts the cholesterol deception to rest once and for all, saving you money, time and life.

Dr. Uffe Ravnskov began the first chapter of his book Fat and Cholesterol are GOOD for you! by listing the following questions… Did you know…

Unforunately, many people still aren’t aware of this and the cholesterol myth continues at great cost to its victims.  Let’s unravel some of these deceptions one at a time.

The Dangers of Low Cholesterol

In medical school, doctors are routinely taught by representatives of drug companies.  This is why they learn profitable lies like high cholesterol is bad, and that lowering it with statins will improve patient health.  In reality, scientific journals have been showing for decades that the opposite is true – having low cholesterol is a very dangerous situation with potentially fatal complications.

Statin drugs are commonly prescribed for cholesterol lowering, and they too can come with serious side effects, even aside from the dangers of reduced cholesterol itself.  One of the side effects of statin drugs is they deplete the essential nutrient COQ10, which is important for cardiovascular and overall health.[2][3]  Statins also increase the risk of Type II diabetes.[4]

But that’s enough about statins for now – the purpose of this article is to understand cholesterol.  Let’s look at some evidence of what happens when the body doesn’t have adequate cholesterol.

The Benefits of High Cholesterol 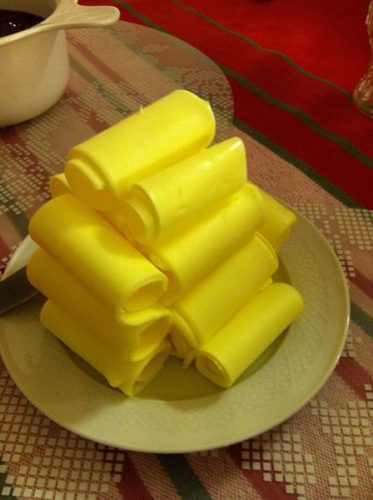 For millennia, butter has been cherished for its abundant health benefits. It includes the fat-soluable vitamins A, D, E and K2 and many other essential nutrients.

Cholesterol doesn’t increase your risk of heart disease, heart attack and stroke, wrote Dr. Dwight Lundell wrote in his book The Great Cholesterol Lie.  This is because cholesterol is vital for human health and consuming it does not contribute to the clogging of arteries (atherosclerosis).  Let’s look at some evidence for this.

More studies have come to the same conclusion, like one by Dr. J.C. Paterson from London, Ontario, Canada, who for many years studied 800 war veterans and found that patients with low cholesterol were just as atherosclerotic as patients with high cholesterol. [29]

These and many other similar studies are either dismissed or never reported by the mainstream because they contradict the profitable yet mistaken mainstream ideology that ‘cholesterol clogs arteries.’  Another ignored line of research has been revealing for decades the true cause of atherosclerosis.

PUFA: The Real Cause of Clogged Arteries

A varnish is a transparent, hard, protective substance brushed onto wood which offers a protective, glossy finish.  Until the advent of cheap varnishes derived from petrochemicals, linseed oil was most commonly used.  The reason Linseed oil makes a good varnish is because – due to its unsaturation – it will harden extremely thoroughly in the presence of oxygen.

Linseed oil varnish is derived from flax seeds – and today flax seed oil is sold in stores as a health food.

Just as linseed oil applied to wood hardens as it reacts with oxygen from the surrounding air, linseed oil (and other polyunsaturated fatty acids) in the oxygen-rich bloodstream harden on the interior surfaces of arteries.  This makes intuitive sense, and it’s also backed by a number of scientific studies.

Another study validating this finding was conducted by Dariush Mozaffarian and his colleagues from the Channing Laboratory at Harvard University, who sought to determine the effects of saturated vs unsaturated fat on the progression of atherosclerosis.  The scientists asked elderly women with heart disease the type of food they had eaten, and found that atherosclerosis in those who had eaten the smallest amounts of saturated fat and the largest amounts of unsaturated polyunsaturated fats had worsened the most.[61]

Now that we understand it’s polyunsaturated fats omega-3 and omega-6 that clog arteries, let’s dig a little deeper to understand how it works.  To the extent that a fat is unsaturated, it is increasingly reactive.  Conversely, saturated fats are protective because they are not vulnerable to free radical reactions.

When you consume a meal of unsaturated fats, the free fatty acids will enter your bloodstream – and these highly unstable fat molecules will begin reacting with oxygen.  The oxidation and hardening of unsaturated fatty acids are catalyzed primarily by the presence of iron in the blood.[31][32] 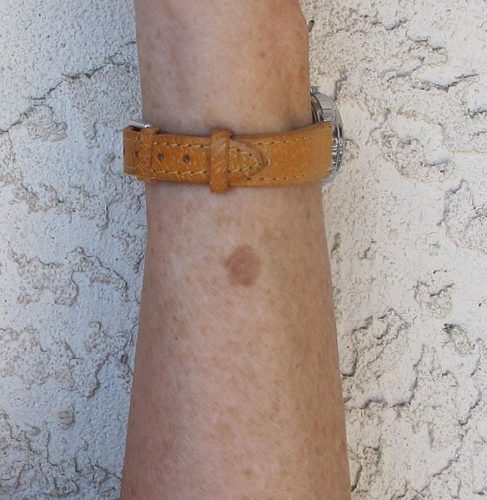 Age spots, also known as liver spots or lipofuscin, are also caused by the reaction between PUFA and iron.

Age spots, also known as liver spots or lipofuscin, are also caused by the reaction between PUFA and iron.  According to Dr. Ray Peat.  “Age pigment is the brown material that forms spots on aging skin, and that accumulates in the lens of the eye forming cataracts, and in blood vessels causing hardening of the arteries, and in the heart and brain and other organs, causing their functions to deteriorate with age. It is made up of oxidized unsaturated oils with iron.”

While small amounts of iron are required for health, in excess it is toxic like all heavy metals.  The typical western diet has more than enough iron, which is why foods like milk – which is almost entirely absent of iron, because the mother protects the baby by filtering it from the milk – are important, safe and nourishing.  Both age spots and hardening of the arteries can be prevented by reducing your consumption of both unsaturated oils and iron in the diet.

Summary: Just as linseed oil brushed onto a piece of wood hardens through the process of oxidation, oxidized ‘essential’ unsaturated fatty acids cause hardening of the arteries.

Hypothyroidism: The Real Cause of High Cholesterol

It is clear now that having high cholesterol is not a threat to your health and that it even offers health benefits that can extend your lifespan.  Although the high cholesterol itself is not a health concern, when somebody has very high cholesterol, something is happening inside the body that’s preventing the optimal use of cholesterol.

Supplementation with a dessicated thyroid supplement (dry powdered thyroid gland pressed into a tablet) can be used to significantly benefit your health by permitting the conversion of cholesterol into the valuable, youth-associated hormones pregnenolone, testosterone, DHEA and progesterone.

“People with high cholesterol live the longest. This statement seems so incredible that it takes a long time to clear one´s brainwashed mind to fully understand its importance. Yet the fact that people with high cholesterol live the longest emerges clearly from many scientific papers. Consider the finding of Dr. Harlan Krumholz of the Department of Cardiovascular Medicine at Yale University, who reported in 1994 that old people with low cholesterol died twice as often from a heart attack as did old people with a high cholesterol.1 Supporters of the cholesterol campaign consistently ignore his observation, or consider it as a rare exception, produced by chance among a huge number of studies finding the opposite.”
– Dr. Uffe Ravnskov, Fat and Cholesterol are GOOD for you!

“A study that included 100,000 healthy participants in San Francisco over a fifteen-year period found that those with low cholesterol values were much more likely to be admitted to hospitals with infectious diseases.”
― Jonny Bowden, The Great Cholesterol Myth

“If you’re afraid of butter, use cream.”
― Julia Child

“Several serious medical studies and entire referenced books show that lowering cholesterol with medications did NOT reduce the number of deaths by stroke nor the amount of sickness, including heart attacks and (Atkins, Herbert, TW, Suurbula, Ravnskov, Smith). In addition, some commonly prescribed cholesterol-lowering drugs actually lowered the good HDL cholesterol as well (Johansson), putting you at higher risk of an early heart attack.”
― Dr. Sherry Rogers

“One recent study performed by the American Medical Association and published in the _Archives of Internal Medicine_ in January 2012 demonstrated an astounding 48 percent increased risk of diabetes among women taking statin medications.

This study involved big numbers — more than one hundred sixty thousand postmenopausal women — making it hard to ignore its significance and gravity. Recognizing that type 2 diabetes is a powerful risk factor for Alzheimer’s disease, a relationship between statin drugs and cognitive decline or cognitive dysfunction is certainly understandable.
― David Perlmutter, M.D., Grain Brain”

“Nothing could be further from the truth than the myth that if we lower our cholesterol levels we might have a greater chance of living longer and healthier lives. In a recent report appearing in the prestigious medical journal the Lancet, researchers from the Netherlands studied 724 elderly individuals whose average age was eighty-nine years and followed them for ten years. What they found was truly extraordinary.

During the study, 642 participants died. Each thirty-nine-point increase in total cholesterol corresponded to a 15 percent decrease in mortality risk. In the study, there was absolutely no difference in the risk of dying from coronary artery disease between the high- versus low-cholesterol groups, which is incredible when you consider the number of elderly folks who are taking powerful cholesterol-lowering drugs. Other common causes of death in the elderly were found to be dramatically associated with lower cholesterol. The authors reported: ‘Mortality from cancer and infection was significantly lower among the participants in the highest total cholesterol category than in the other categories, which largely explains the lower all-cause mortality in this category.’ In other words, people with the highest total cholesterol were less likely to die from cancer and infections — common fatal illnesses in older folks — than those with the lowest cholesterol levels. In fact, when you compare the lowest- and highest-cholesterol groups, the risk of dying during the study was reduced by a breathtaking 48 percent in those who had the highest cholesterol. High cholesterol can extend longevity.
― David Perlmutter, M.D., Grain Brain”